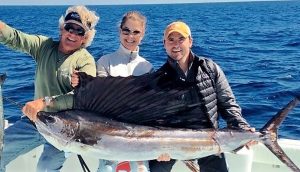 During the winter and spring, Sailfishing off the South Florida coast is as good as it gets. There are quite a few Sailfish tournaments during this time of year and Capt. Dennis is available for tournaments. While kite fishing and drifting for Sailfish, it’s not unusual to catch Dolphin, Tuna, and Kingfish.

Sailfishing in Miami during the winter months is probably the best in the world. Sailfish are very acrobatic and have a tendency to dance all over the surface when first hooked. Anglers from all over the world come to Miami, Florida just to catch Sailfish. The season usually runs from November through May and can even last into June. During the winter, as cold fronts come down from the north, the Sailfish chase the baitfish, which are migrating south. Sailfishing over the last 10 years has improved tremendously due to the fact that they are all released. If the Sailfish you catch is your first, and you would like to have it mounted, we will measure it, release it, and have a replica made of your catch.

Most of the catches are made while using fishing kites – “kite fishing”. They keep the bait suspended on the surface. If you’re watching the baits you can see the most exciting action you’ve ever seen when the strike occurs. Kite fishing is not just for Sailfish. We also catch Mahi Mahi (Dolphin), Wahoo, Tuna, Kingfish and anything else that swims by. Winter is a busy time so please book in advance. 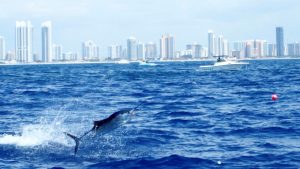