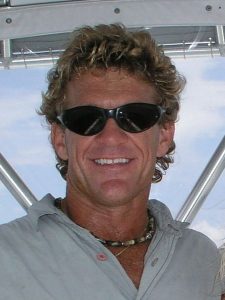 Honest, reliable, and hardworking are three adjectives commonly associated with Miami native Captain Dennis. Dennis has been catching fish near Haulover Inlet for numerous years, beginning during his childhood when he would go out on the Tiki drift boat with his father, Captain Frank Forgione which was operated from 1957 to 1995 out of Haulover Marina. No other charter captain in all of Miami has the rich history that Dennis has.

With the assistance of a friend, Dennis received his first boat in 1986, a Mako stretching 25 feet that he utilized for commercial fishing as well as sporadic charters. It wasn’t until 1989 that he truly set his sights on becoming a captain when he purchased a 25-foot Dusky with twin engines. Dennis would eventually upgrade his Free Spool to a 32-foot custom built inboard motor fishing boat.

Throughout his life and career, Dennis has led many anglers to achieve IFGA world records. He also has the distinction of having won both the Miami and Fort Lauderdale Billfish fishing tournaments.

Today, the Free Spool Dennis operates is a 40+ foot custom built sport fishing wonder powered by a pair of twin diesel engines and also equipped with a quartet of live wells. The boat also features a 30’ tuna tower, four cockpit chairs in the cockpit and full stand-up head in the cabin. The boat was formerly known as the “How Bout It” from Islamorada, one of the most successful charter fishing tournament boats in the Florida Keys.

This update is by Free Spool Sport Fishing, a custom built 43’ Sports Fisherman Free Spool at Haulover Marina offering an exciting deep sea fishing experience for anyone including families, friends or business associates. Spearheaded by Miami native Captain Dennis Forgione. We fish for many different species of fish and we specialize in kite fishing for sailfish and mahi, live bait fishing for kingfish and other game fish. For more information on sport fishing Miami or to book a trip, please call 305-582-5445.