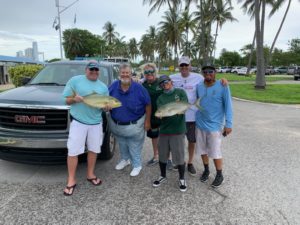 The Free Spool crew had a special treat this year for Father’s Day. Legendary Captain Bouncer Smith joined us for a day of fishing and fun. Capt. Bouncer shared so many stories and experiences, many of which involved our own Captain Dennis Forgione, with whom he has many years of friendship and fishing stories. Captain Bouncer also autographed copies of his book “The Bouncer Smith Chronicles: A Lifetime of Fishing” for everyone on board.

The catch of the day was Yellow Jack. Yellow Jacks are often caught while trolling for other fish, but can also be targeted when schools are found feeding over wrecks. Like other members of the Jack family, Yellow Jacks are tough fighters. They are fast runners and they pull hard when hooked. However, the key difference is that unlike other Jacks, Yellow Jacks are some of the best eating fish caught here in South Florida. Many anglers mistake them for an inedible fish and they throw them back in the ocean. If you are lucky enough to land one of these, do yourself a favor and KEEP IT!