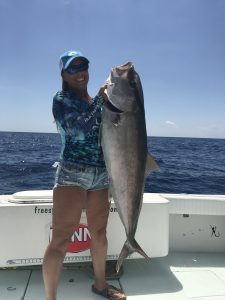 The amberjack, commonly called the AJ, is a popular fish found in the Atlantic Ocean and the Gulf of Mexico that you may encounter while fishing off the South Florida coast. Amberjacks are rarely sought after by anglers unless they are looking for a good fight! They’re most commonly caught while fishing for more desirable fish, like grouper and mutton snapper.

While many anglers think of the amberjack as a single fish species, there are actually three different types of fish that fall under the amberjack classification. The greater amberjack bears striking dark stripes that run from the dorsal fin to the nose. Lesser amberjacks, on the other hand, have larger eyes and a more rotund figure. Banded rudderfish, the third type of amberjack, have vertical bands and a prominent dorsal fin.

Schools of young fish are common at 5-20 pounds. The average size over deep wrecks and reefs is 30-60 pounds, but you can also hook an amberjack weighing in at 100-150 pounds! The International Game Fish Association lists a 156-pound amberjack caught off Japan in 2010 as the all tackle world record.

The amberjack is a strong fighter that powers deep and defies lifting. Fairly long runs can also occur early in the fight. A great deal of stamina matches their strength. Novices may fight an average size amberjack for 30-40 minutes.

Amberjack are most often caught aboard charter boats and party boats on heavy rods and reels with lines testing 50 pounds or more. Experienced light-tackle anglers can successfully battle them with spinning and baitcasting rigs, and even fly rods. Live chum will also draw amberjack from the depths. The best bait is any type of live fish using heavy tackle.

Spearheaded by Miami native Captain Dennis Forgione, we fish for many different species of fish and we specialize in kite fishing live bait. For more information on sport fishing Miami, or to book a trip, please call 305-582-5445.